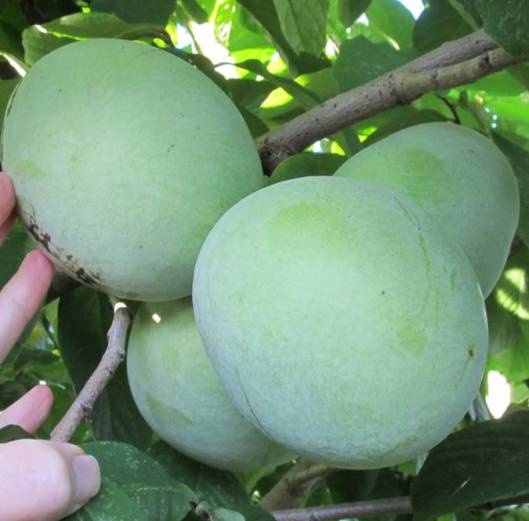 Kentucky State University announces the release of a new North American pawpaw variety, KSU BensonTM (KSU7-5 cultivar) for grower trial. The new variety was unveiled at the 4th International Pawpaw Conference, which took place on KSU’s Frankfort campus and at its research and demonstration farm Sept. 1-3, 2016.

This pawpaw variety is a high yielding, round, medium-sized fruit of the early season ripening variety. It has a unique mango-, banana-, pineapple-like flavor. This selection is unique in that it bears round fruit that are attractive and can also be packed easily.

The new release is named in honor of Dr. Harold R. Benson who served as director of the Land Grant Program for more than 36 years. Dr. Benson supported the KSU pawpaw research program from its beginning, from its founding by Dr. Brett Callaway in 1990 to its expansion under Dr. Desmond Layne from 1993 to 1998. The program has since undergone rapid expansion under the leadership of Dr. Kirk Pomper, interim director of the Land Grant Program and professor of horticulture at KSU, since 1998.

“We wanted to recognize Dr. Benson’s long-term commitment to the KSU pawpaw program,” Dr. Pomper said. “We would not have the KSU pawpaw varieties that we have today without his support of the program.”

“When I received the invitation, I was honored and wanted to be here for the dedication,” Dr. Benson said. “I knew that if we stayed with pawpaw it would be successful.”

KSU-BensonTM is the second pawpaw variety released. The first cultivar, KSU-AtwoodTM, is named for Rufus B. Atwood, former president of Kentucky State College (now University) from 1929-1962 who led efforts to desegregated education in Kentucky in the 1940s.

Kentucky State University will be licensing nurseries to produce and sell KSU-BensonTM. These trees should be available for purchase next year.

For more information on the KSU pawpaw program or the KSU-BensonTM pawpaw, contact Kirk Pomper at kirk.pomper@kysu.edu.