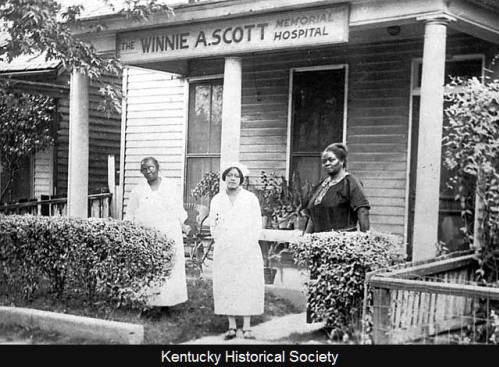 In honor of February being Black History Month (and for purely personal reasons), Capital Living will do its best to uncover African American History throughout Frankfort and Franklin County over the next several weeks.

South Frankfort’s northeastern section has historically had a large African American population. Because of segregation, however, until the Scott Hospital was constructed African Americans had few options for medical treatment. In the book “Community Memories: A Glimpse of African American Life in Frankfort, Kentucky,” Margaret McIntosh recalls, “there was no hospital for Blacks to go to, unless it was an emergency. And if it was an emergency, they had to go in the back way and be operated on and after they recovered, they’d bring them back out and take them home.”

The Women’s Club Hospital Company, with community support, established a hospital on December 26, 1915. The property for the hospital was bought from Lena Morton, a local widow. The hospital was housed in a two-story frame building in a residential area. The hospital consisted of seven or eight patient rooms and an operating room. King’s Daughters Hospital, another Frankfort hospital located a few blocks away, provided some financial assistance and advised on the development of the facility.

Originally known as the Women’s Improvement Club Hospital, its name was changed to honor Winnie A. Scott, an early chairman of the hospital’s board of directors who was instrumental in its founding. Scott graduated from what is now Kentucky State University in 1890 as part of its first graduating class. She became a teacher at the Clinton Street School and was the Superintendent of Corinthian Baptist Sunday School. Scott died on May 19, 1920, at age fifty. Winnie A. Scott Hospital was the only Frankfort hospital serving African Americans until desegregation of King’s Daughters Hospital in 1959.

In January 1943, John M. Perkins, a Frankfort businessperson, donated $5,000 to the hospital and proposed it become part of Kentucky State College. Merging the hospital with the college had the potential of cultivating a nursing school. The state was asked to provide supplemental funds for this proposal. However, limited resources during World War II made the construction of a new facility unfeasible. Therefore, the hospital did not become part of college, which began a nursing program in 1967.

The hospital asked for some federal grant funds under the Hill-Burton Law, an act passed in 1946 that gave health care institutions grants and loans for construction and modernization. Grant recipients were required to provide a proportional amount of services to people who were unable to pay and make their services available to everyone living in the facility’s area. King’s Daughters Hospital also asked for funding at the same time. Federal authorities responded that Frankfort was too small to receive two similar loans from the agency. Ending a forty-four-year operation, Winnie A. Scott Hospital merged with King’s Daughters located on Steele Street, partly due to the federal grants requiring integration.

The building was converted into apartments after the hospital closed. Recommendations were also made convert it into a rest home for African American senior citizens.

Reprinted from Kentucky Department of Tourism (2005)

The founder of Negro History Week, Dr. Carter G. Woodson, was born in New Canton, Virginia and worked in the coal mines of West Virginia and Kentucky. He put himself through high school, graduated from Berea College and went on to earn a PhD in history from Harvard University. Dr. Woodson chose of the second week of February due to the fact that activists Abraham Lincoln and Frederick Douglass both celebrated birthdays in that week.

Realizing the value of the heritage of all Kentuckians, the Commonwealth has made continuous efforts to preserve sites and events of the African-Americans Cultural Heritage.

Mason County Kentucky, located along the Ohio River was an essential link in the Underground Railroad. Through museums and historical landmarks you can retrace the footsteps of slaves searching for freedom. The “railroad” was made up of conductors, safe houses and stations, all of which led to freedom across the Ohio River.

For more information on cultural events and historic locations, contact the Department of Tourism Travel Consultants at 800-225-8747 or check our website at www.kentuckyunbridledspirit.com.

The Kentucky Department of Tourism, an agency of the Kentucky Commerce Cabinet, exists to promote The Commonwealth as a travel destination, to generate revenue and create jobs for Kentucky’s economy. Tourism is a $9.3 billion business for Kentucky.  It’s the state’s third largest industry and second leading employer.