Kentucky State University, Frankfort’s University, is in a heated social media battle for $50,000 in the Home Depot Retool Your School Contest. The online and social media contest started on February 24th and ends on April 16th. To date, KSU has racked up nearly 200,000 votes. Which is amazing since it’s over 100,000 more than the school just behind them in the same bracket. However, they are just slightly behind Ohio’s Central State University, which leads by only a few hundred votes. THIS is the community’s opportunity to get behind THEIR HBCU! If you’re on Twitter, then TWEET #KyState_RYS17 every chance you get. Tweet MULTIPLE #KyState_RYS17. RETWEET any and ALL #KyState_RYS17. Instagram as many #KyState_RYS17s as you can! RePost them too. And VOTE online HERE!!! Vote often. Vote once a day. Everyday. On every devise. Follow Dr. Shannon Brogan, @SpokenByBrogan. She is one of the driving forces behind #PayItFwdFrankfort each year. Help KSU and show your support for this historic university!!! Its time Frankfort. 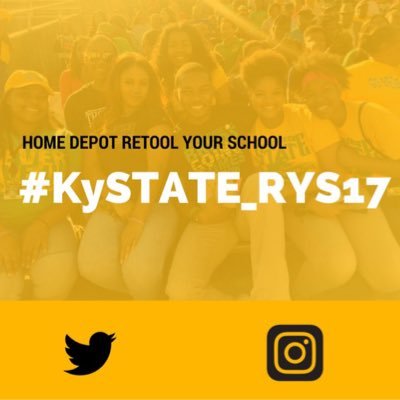 ABOUT THE RETOOL YOUR SCHOOL PROGRAM

We are excited to enter our eighth year of RETOOL YOUR SCHOOL, developed to benefit our nation’s treasured Historically Black Colleges and Universities (HBCUs). A total of nine (9) grants will be awarded this year: three (3) $50,000 grants, three (3) $40,000 grants and three (3) $30,000 grants. Please review all Program Rules.

The Home Depot strives to give back to our nation’s Historically Black Colleges and Universities (HBCUs) what they have so generously given to the communities they are a part of. A strong foundation. Renewed purpose. Distinctive character. With support from The Home Depot, the grant awarded from the RETOOL YOUR SCHOOL program gives schools an opportunity to make upgrades to their campuses. A total of nine (9) campus improvement grants will be awarded. Schools will be divided into clusters based on their student enrollment population. Per cluster, there will be one (1) $50,000 Grand Prize Grant, one (1) $40,000 2nd Place Grant and (1) $30,000 3rd Place Grant. All grants will be awarded based on consumer voting and project proposal scores, which are determined by a panel of judges. All government-accredited HBCUs are invited to participate. All votes are subject to Sponsor verification.