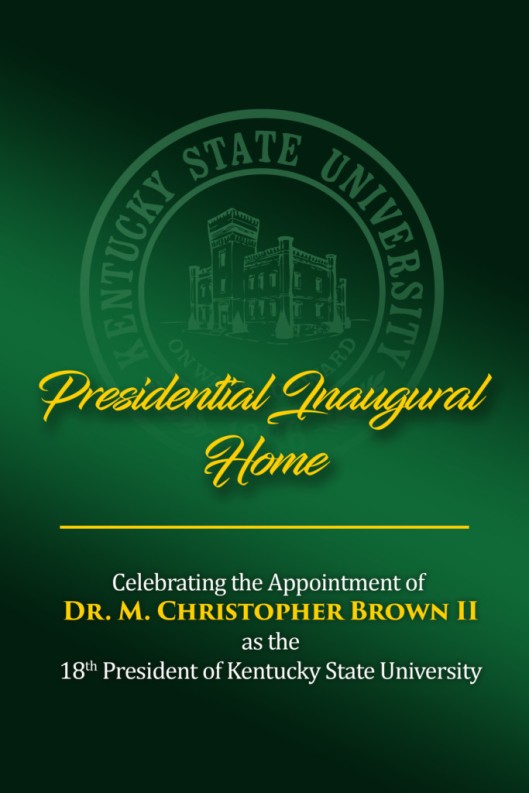 The Kentucky State University Board of Regents submits the following Resolution:

WHEREAS, Dr. Brown most recently served as the Executive Vice President for Academic Affairs and Provost of the Southern University and A & M College System; and,

WHEREAS, Dr. Brown was named the 2013 Male HBCU President of the Year – by the National Center for HBCU Media Advocacy; and,

WHEREAS, during Dr. Brown’s tenure as the Eighteenth President of Alcorn State University the university received the highly coveted 2012 HBCU of the Year Award – from the National Center for HBCU Media Advocacy; and,

WHEREAS, on the fourteenth of April two thousand seventeen M. Christopher Brown II, Ph.D. entered into a Board of Regents ratified contract to serve as the Eighteenth President of Kentucky State University; and,

WHEREAS, M. Christopher Brown II, Ph.D. officially began his presidential duties at Kentucky State University on the fifteenth of May two thousand seventeen; and,

WHEREAS, M. Christopher Brown II, Ph.D. is the Chief Executive Officer of the University and reports to the Board of Regents. Dr. Brown manages, directs, and is responsible for the conduct of all University affairs; and, 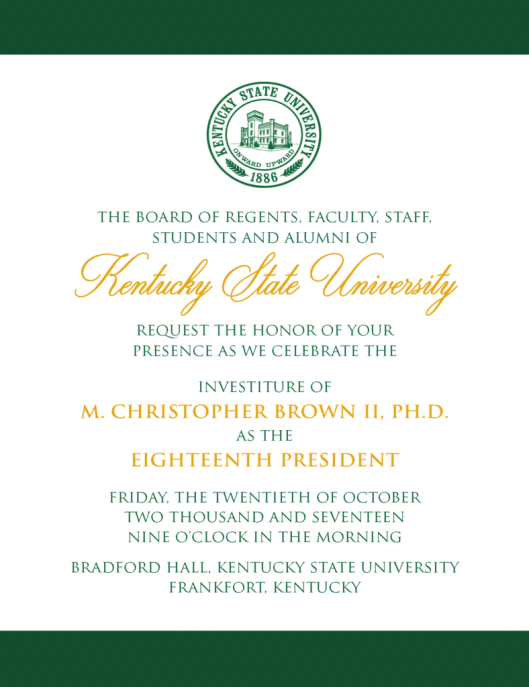 Join us for the Inaugural Scholarship Luncheon immediately following Founder’s Day and Investiture Convocation in The William Exum Center.

M. Christopher Brown II is the 18th president of Kentucky State University and founder of the Atwood Institute on Race, Education, and the Democratic Ideal.

After earning his Ph.D., Dr. Brown joined the faculties of the University of Missouri-Kansas City, the University of Illinois at Urbana-Champaign, and The Pennsylvania State University where he earned tenure.  During a professional leave of absence, Dr. Brown served as executive director of the Frederick D. Patterson Research Institute of the United Negro College Fund (FDPRI/UNCF), director at the American Educational Research Association (AERA), and vice president at the American Association of Colleges for Teacher Education (AACTE).

Dr. Brown’s Alcorn presidency reinvigorated one of most important public college campuses in America.  Under his leadership, the university experienced record enrollment growing to over 4000 students for the first time in its 140 plus year history.  Dr. Brown also dedicated a $47 million, state-of-the-art student housing complex, spearheaded the renaming of Highway 552 in honor of the university’s longest-tenured president – Dr. Walter Washington, and dedicated the world’s largest statue to Alcorn alumnus and civil rights figure, Medgar Evers.  In addition to establishing the Office of Educational Equity and Inclusion, Dr. Brown hired the first non-black head football coach in both institutional and the Southwestern Athletic Conference (SWAC) history.

Dr. Brown worked to develop and maintain a campus atmosphere dedicated to “excellence without excuse”.  Without question, he increased awareness of the Alcorn institutional brand and enhanced its recognition.  In 2012 Alcorn State University received the highly coveted HBCU of the Year Award, and in 2013 Dr. Brown was named Male HBCU President of the Year – both from the National Center for HBCU Media Advocacy.

Dr. Brown served as senior fellow at the American Association of State Colleges and Universities (AASCU).  As a member of the Division of Academic Leadership and Change, he was responsible for assisting with the periodic review and improvement of administrative leadership training and development programs sponsored by the association, developing rubrics and monographs incident to presidential leadership and university governance, as well as other institutional support projects.  During his fellowship, he completed a book with Dr. Christopher Knaus, “Whiteness Is The New South Africa:  Qualitative Research On Post-Apartheid Racism In Schools And Society”.

Dr. Brown is the author/editor of 16 other books and monographs.  He is the author or co-author of more than 100 journal articles, book chapters, and publications related to education and society.  Regarded as an international scholar, he has lectured and/or presented research in various countries on six of seven continents – Africa, Asia, Australia, Europe, North America, and South America.  He is especially well known for his studies of historically black colleges, educational equity, and professorial responsibilities.  His research and scholarly writing includes publications on education policy, governance/administration, and institutional contexts.

Dr. Brown is the recipient of the 2001 Association for the Study of Higher Education’s Promising Scholar/Early Career Award, the 2002 AERA Committee on Scholars of Color Early Career Contribution Award, the 2007 Philip C. Chinn Book Award from the National Association for Multicultural Education, the 2008 Association of Teacher Educators Distinguished Educator Award, and the Association of Public and Land-grant Universities Commission on Access, Diversity, and Excellence 2013 Distinguished Service Award. Dr. Brown received the Isaac Murphy Image Award for Education at the 2012 Kentucky Derby.  He was also recognized with a 2013 Trofeu Raca Negra (Black Race Trophy) from the Honors Council of the Society of Afro-Brazilian Socio-Cultural, the 2015 Distinguished Alumnus Award from South Carolina State University, and a 2017 Trumpet Award for Spiritual Enlightenment.

A former member of the South Carolina State University Board of Trustees, Dr. Brown is a member of the Alpha Phi Alpha Fraternity, Incorporated, the 100 Black Men of America, Rotary International, a 33rd degree Free and Accepted Mason Prince Hall Affiliation, and an ordained Baptist minister.

He is married to the former Adrienne Joyce Allen of Canton, Mississippi.  Mrs. Brown is a middle school teacher.

Past, present and future, Kentucky State University is intent on providing opportunity and access to all students. Though it has changed presidents, names and educational philosophies over its nearly 130-year history, it has remained true to its mission.

KSU started out Oct. 15, 1885, as an idea. A conference was called for leaders in Kentucky to discuss issues critical to the social welfare of America and the state. The Commonwealth needed more normal schools to train African American teachers for the African American elementary schools.

The subcommittee charged with investigating the issue and devising a plan of action proposed creating a State Normal School for Colored Persons. It submitted a resolution to the General Assembly in the spring of 1886 and the legislators authorized the school’s creation May 18, 1886. They also pledged biennial contributions of $3,000 for operating expenses and $7,000 for classroom construction.

Many schools began as normal schools back then for the sole purpose of training teachers. At that time, students enrolled in a two- to three-year program that focused on training teachers, after which they would earn their teaching certificates.

Though several cities submitted bids to be the site of the state-funded normal school for African Americans, Frankfort offered the best package – a monetary incentive and a parcel of land where the school could be built.

When it opened Oct. 11, 1887, the school had limited resources and sparse attendance. In the first term, the school had three teachers, 55 students and one building – Jackson Hall.

Almost immediately after opening, the normal school added a high school. The students coming to the normal school came from parts that only had school available to them through eighth grade. They could come and earn the high school requirements and then continue on to earn their teaching certificate.

In 1929, President Rufus Atwood closed down the high school because it was a financial drain and by then most students had access to high school. Atwood used the money to improve the college.

Atwood was an influential figure for the sole reason that he served for 33 years. Frankfort was a political town. Often the president would be removed when a new governor or legislature came to power and then reseated when that administration was voted out.

Atwood registered as an independent and tried to maintain a neutral front, avoiding political battles and instead focused solely on improving the school. He began the first modern yearbook, the first student newspaper and gained accreditation for the school.

Atwood, who had no children of his own, treated his students as his children, acting as a father figure and administrator. He also positioned the university for change, including integration, and expansion.

Atwood left in 1962 and the first white student who went on to graduate began at the college in 1960.

As the university began to grow and change, so did its moniker. The school was renamed several times in its 120 year history, starting with the State Normal School for Colored Persons in 1886, when it opened. In 1902, the name changed to the Kentucky Normal and Industrial Institute for Colored Persons, in keeping with the school’s new teaching philosophy.

Taking its cue from Booker T. Washington, the school began focusing less on its liberal arts roots and offering more manual and industrial training for its students when it took advantage of the 1890 Morrill Land Grant Act. That move helped the school acquire additional money and property and more political and economic support from whites who favored the Hampton-Tuskegee Industrial Education Philosophy.

Washington publicly promoted and implemented an educational philosophy at Tuskegee Institute that African Americans should develop their place in the South by working hard at skilled trades in agriculture and industry.

Over 122 years, the school has changed from an institution that focused solely on training teachers to one that looked more like a comprehensive university with a variety of majors students can choose from, Butler said.

Though the school has maintained its liberal arts roots, it also offers training in professional fields such as nursing and public administration.

The school also has changed in terms of its population. The faculty, staff and students are a diverse mix, making KSU the most diverse public institution in the Commonwealth.

Technology has allowed the school to reach out to even more people, including the newly approved master’s of special education program, which is completely an online curriculum and will allow students throughout the national and world earn their degree from Kentucky State University.

Other unique programs for the university are the aquaculture program, KSU’s program of distinction, and the governmental services center, which enables the university to contribute to the training of state workers.

However, it is the sense of community, of family, that sets the university apart for alumni. It began as a special relationship between the faculty and students in the school’s early days because classes were so small. But the school kept that atmosphere as it grew. Many alumni still refer to the university as “mother” because of the foundation it provided them in their formative years.