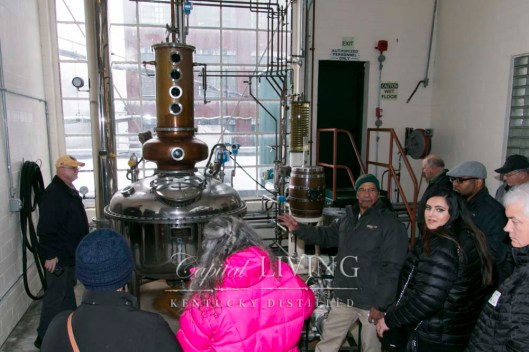 FRANKFORT, FRANKLIN COUNTY, KY (Jan. 18, 2018) Bourbon sales continue to grow, and bourbon tourism is growing at an equally rapid pace, at least for Buffalo Trace Distillery. In 2017, this National Historic Landmark Distillery set a new record for visitation, ending the year with 201,491 guests. This is an increase of 18% in visitation over last calendar year, and a total increase of 287% since 2010.

“It took us 15 years to get to 100,000 visitors, but only three years to get to 200,000, so the momentum just keeps going,” said Meredith Moody, marketing services director. Buffalo Trace is already looking at ways to expand its Visitor Center, which was just expanded in 2015 to accommodate its ever-increasing needs. The expansion is part of the $1.2 billion dollars Buffalo Trace plans to spend in the next ten years to accommodate not only more visitors, but more bourbon barrels and more bottling lines.

As previously announced, Buffalo Trace is building new barrel warehouses on the farm it owns adjacent to the Distillery, at a rate of one new warehouse every four months for the next ten years. These new warehouses will hold 58,000 barrels, and construction on the first one is nearly complete.

Buffalo Trace will also expand its distilling operation, which includes new mash cookers, a boiler and fermenters. In order to make room, the existing bottling hall will be moving to another area on site starting this spring/summer and the bottling lines will be modernized to allow for more efficiency and better capacity.  This is the first large scale structural expansion at Buffalo Trace Distillery’s campus since the 1950s.

“We are bursting at the seams, so to speak, in all areas, distillation, bottling and tourism, so we’re looking forward to our new expansion,” added Moody.