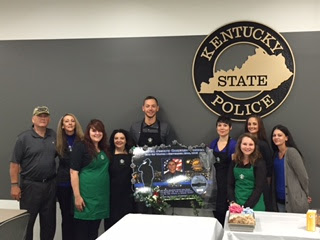 At Starbucks we value nurturing the human spirit; it is at the core of everything we do.  Starbucks in Frankfort was invited by the parents of the late Trooper Joseph Cameron Ponder to serve coffee and pastries at the graduation ceremony for the Kentucky State Police Academy and their families, in honor of their sonon Thursday October 29. Mrs. Tiffany; Trooper Ponders Mother,  expressed her desire to show gratitude to all of the Troopers that have worked so hard to complete the academy training as well as the family members that sacrificed to help support them.
Starbucks #2763 is proud to be part of the healing process for this family during their time of grief and support the many men and women and families that sacrifice so much every day.  We will continue to partner with the family of the fallen trooper and the KSP to support our State Police.

Seven times a day someone in this country dies in a fire. The Red Cross campaign focuses on joining fire departments and community groups nationwide to install smoke alarms in communities with high numbers of fires and encouraging everyone to practice their fire escape plans.

“Installing smoke alarms cuts the risk of someone dying from a home fire in half, so we’re joining with community groups to install smoke alarms and teach people how to be safe from home fire,” said Paula Rutledge, Volunteer Specialist with the American Red Cross Frankfort office.

The Red Cross also is asking every household in America to take the two simple steps that can save lives: checking their existing smoke alarms and practicing fire drills at home.

The Red Cross responds to nearly 70,000 disasters each year in the United States and the vast majority of those are home fires. In Frankfort last year, the Red Cross responded to 15 single-family and 1 apartment fire providing assistance to 57 people. You can help people affected by disasters like home fires and countless other crises by making a donation to support American Red Cross Disaster Relief. Your gift enables the Red Cross to prepare for, respond to and help people recover from disasters big and small. Visit redcross.org, call 1-800-RED CROSS or text the REDCROSS to 90999 to make a $10 donation.

About the American Red Cross:

The American Red Cross shelters, feeds and provides emotional support to victims of disasters; supplies about 40 percent of the nation’s blood; teaches skills that save lives; provides international humanitarian aid; and supports military members and their families. The Red Cross is a not-for-profit organization that depends on volunteers and the generosity of the American public to perform its mission. For more information, please visit redcross.org or visit us on Twitter at @RedCross.

(FRANKFORT, Ky.) – The Kentucky State Police remind parents not to leave a child alone in a hot car as temperatures in the Bluegrass are on the rise. It may seem like common sense, but every year law enforcement agencies answer calls about unattended children in vehicles. The National Safety Council (NSC) reports that nine children have already died in 2014 from being left in hot cars across the U.S.

An ongoing study by San Francisco State University estimates that since 1998, there have been 615 heatstroke deaths of children left in vehicles, an average of 38 deaths per year. Most of those deaths were children under the age of two-years.

In 2000, Kentucky passed “Bryan’s Law,” which makes a person liable for second-degree manslaughter or first-degree wanton endangerment for leaving a child younger than eight years of age in a motor vehicle where circumstances pose a grave risk of death.  The law was named after 11-month old Bryan Puckett, who died July 13, 1999 after being left in a hot car by his babysitter.

KSP spokesman Sgt. Michael Webb says most people know the dangers of leaving a child in a hot car, but each year these senseless tragedies continue to occur.

“A child’s body heats up three to five times faster than that of an adult,” says Webb. “The temperature inside a car can rise 19 degrees in 10 minutes.  Together, this can be deadly in a very short period of time.”

Kentucky’s last reported death from a child being left in a car was during 2012 in Louisville. The NSC reports that 44 children died last year from vehicular heatstroke in the U.S.

Webb says while a person will face criminal charges for leaving a child in a car, the pain and guilt from making such a mistake will last far longer.

KSP asks citizens to keep an eye out for children left in vehicles on hot days and to call 911 if they think the occupant is in danger.

Photo courtesy of General Motors. Depicts the temperature change within a vehicle (in ten minute time) when outside temperature is 80 degrees

Looking for something to do this Fall Weekend in Frankfort?  Then check out what’s going on here at Capital Living…Be …

This is a joint effort between the Commonwealth Credit Union, your Franklin County Sheriff’s Office, Ky State Police and the …

Kentucky State Police host a Safe Trick-or-Treat Halloween at their headquarters on Versailles Road.  On a cold, rainy night for trick-or-treating, families were more than happy to trick-or-treat by car.

To order photos from this event, follow this link: http://www.photoreflect.com/store/thumbpage.aspx?eid=0YPE00BC